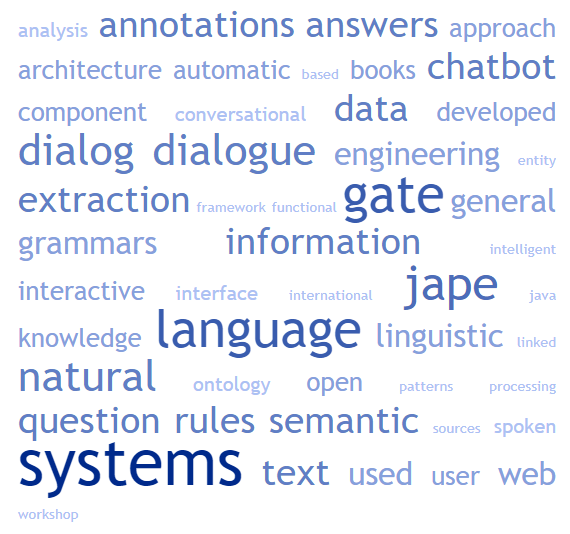 JAPE (Java Annotation Patterns Engine) is a finite state transducer that operates over annotations based on regular expressions. It is a tool used in natural language processing (NLP) for identifying and extracting specific patterns from text.

JAPE is written in Java, and it uses a combination of finite state machines and regular expressions to analyze text and identify patterns. It operates by dividing text into a series of annotations, which are units of text that correspond to specific patterns or concepts. These annotations are based on regular expressions, which are used to identify specific patterns of words or phrases in the text.

Once the text has been divided into annotations, JAPE uses finite state transducers to process the annotations and extract the information that they contain. This allows JAPE to identify and extract specific patterns and concepts from the text, and to use this information to generate structured data or to perform other tasks. JAPE is widely used in NLP, and it is an important tool for identifying and extracting patterns from natural language text.

JAPE can be used in dialog systems to help the system understand the meaning of user input and generate appropriate responses. In a dialog system, JAPE can be used to analyze the user’s input and identify specific patterns or concepts that are relevant to the conversation. For example, if the user asks a question, JAPE can be used to identify the words and phrases in the user’s question that are relevant to the conversation, and to extract those words and phrases as annotations. These annotations can then be used by the dialog system to understand the meaning of the user’s question and to generate an appropriate response.

JAPE can also be used to analyze the dialog system’s previous responses and other pieces of text in its knowledge base, and to identify patterns and concepts that are relevant to the conversation. This can help the system to generate responses that are similar to its previous responses, and that are appropriate and relevant to the user’s input. Overall, JAPE is a useful tool for dialog systems, and it can help the system to understand the meaning of user input and generate more accurate and relevant responses.

A word lattice is a directed acyclic graph (DAG) with a single start point and edges labeled with a word and weight. It is a data structure commonly used in natural language processing (NLP) to represent alternative interpretations of a piece of text.

Overall, word lattices and JAPE can be used together in a NLP system to help the system understand the meaning of text and generate appropriate responses. The word lattice is used to represent the possible interpretations of the text, and JAPE is used to identify and extract specific patterns and concepts from the text. This allows the system to generate more accurate and relevant responses to user input.

An approach to enhance chatbot semantic power and maintainability: experiences within the FRASI project
A Augello, G Pilato, A Machi… – 2012 IEEE Sixth …, 2012 – ieeexplore.ieee.org
… linguistic features [1]. They differ mainly for the knowledge sources, the broadness of domain expertise, the kind of information to get, and the kind of results to give [2]. On the other hand Natural Language Dialog Systems (NLDs) are an … http://gate.ac.uk/userguide/chap:jape …

In-the-wild chatbot corpus: from opinion analysis to interaction problem detection
I Maslowski, D Lagarde, C Clavel – International conference on …, 2017 – researchgate.net
… dialog systems are still less numerous, even though the use of chatbot systems by companies … They rely on the GATE JAPE (Java Annotation Pat- terns Engine) that provides finite … Automatically training a problematic dialogue pre- dictor for a spoken dialogue system,” Journal of …

A chatbot for the banking domain
P Schmidtová – 2019 – dspace.cuni.cz
… The first chatbot, Eliza (Weizenbaum, 1966) was a conversation-oriented dialog system designed to behave like a Rogerian psy- chologist … They were used in their standard form, as well as in a GATE-enhanced form called JAPE …

KvGR: A Graph-Based Interface for Explorative Sequential Question Answering on Heterogeneous Information Sources
HF Witschel, K Riesen, L Grether – European Conference on Information …, 2020 – Springer
… Possibly fuelled by the rise of chatbot technology and the resulting expectations of users, it claims that a more interactive approach to both fields will better meet user needs … The grammar consists of JAPE rules in GATE 6 , which annotate occurrences of graph nodes in …

Tools and Methodology for Converting Natural Language into RDF Representations
O Loia, E Kamateri, PD Vasileiadis – academia.edu
… the car.” 3.4 SlugNERDS The Slugbot’s Named Entity Recognition for dialogue Systems (SlugNERDS) tool … of a number of linguistic pre- processing components (based on GATE) followed by … and matches them with the text, based on root forms and JAPE transducers annotates …

A prototype for a conversational companion for reminiscing about images
Y Wilks, R Catizone, S Worgan, A Dingli… – Computer Speech & …, 2011 – Elsevier
… for these, in particular a novel approach to enabling reinforcement learning for open dialogue systems through the … the gazetteers mentioned earlier and the hundreds of extraction rules already present in GATE, about 20 new extraction rules using the JAPE rule language …

Automatic creation of semantic data about football transfer in sport news
QM Nguyen, TD Cao, TT Nguyen – Proceedings of the 16th International …, 2014 – dl.acm.org
… Smartweb System [4] is a multi-dialog system arising answers from the semantic web services … JAPE is a component of GATE, dedicated to identify defined entities by the rules, it is the language used to write the regular expressions (RE) via annotations …

A novel approach for automatic extraction of semantic data about football transfer in sport news
M Steinbauer, M Indrawan-Santiago… – International Journal of …, 2015 – emerald.com
… Smartweb System (Buitelaar et al., 2006) is a multi-dialog system arising answers from the Semantic Web services … JAPE is a component of GATE, dedicated to identify defined entities by the rules, it is the language used to write the regular expressions via annotations …

Supporting domain experts to construct conceptual ontologies: A holistic approach
R Denaux, C Dolbear, G Hart, V Dimitrova… – Journal of Web …, 2011 – Elsevier
JavaScript is disabled on your browser. Please enable JavaScript to use all the features on this page. Skip to main content Skip to article …

PAROT: Translating natural language to SPARQL
P Ochieng – Expert Systems with Applications: X, 2020 – Elsevier
… In our bid to develop an ontology based chatbot, we envision developing a tool that would allow users to use their natural language (NL) and have a near … The component also employs JAPE grammars which expand annotations embedded by the GATE by identifying …

Semantic web search using natural language
I Habernal – 2012 – core.ac.uk
… SLU is a part of Spoken Human-Computer Dialogue system and its role is to robustly interpret the meanings of users’ utterances … It also comes with a framework for context-free grammars called JAPE grammars that are used in AquaLog and PowerAqua … 5http://gate.ac.uk …

Towards efficient sport data integration through semantic annotation
QM Nguyen, TD Cao, HC Nguyen… – … on Knowledge and …, 2012 – ieeexplore.ieee.org
… The SmartWeb [7] system is a multimodal dialog system deriving answers from semantic web services … based on ANNIE, which is the default Information Extraction system associated with GATE [1 … This study defines a set of rules in JAPE grammar for matching each relation in the …

Vyhledávání v Sémantickém webu použitím p?irozeného jazyka
I Habernal – 2012 – dspace5.zcu.cz
… SLU is a part of Spoken Human-Computer Dialogue system and its role is to robustly interpret the meanings of users’ utterances … It also comes with a framework for context-free grammars called JAPE grammars that are used in AquaLog and PowerAqua … 5http://gate.ac.uk …

CNLs for the semantic web: a state of the art
H Safwat, B Davis – Language Resources and Evaluation, 2017 – Springer
… et al. 2007), but much more powerful with respect to grammar expressiveness and ontology authoring capabilities. Like CLOnE, Rabbit is implemented using the GATE framework (Cunningham 2002). Rabbit was developed …

An introduction to question answering over linked data
C Unger, A Freitas, P Cimiano – Reasoning Web International Summer …, 2014 – Springer
… The first step consists in a linguistic analysis of the question using GATE13, in order to detect the question type and to translate the natural language question into a triple-based representation, into so-called query triples … 13 https://gate.ac.uk …

AI: Its nature and future
MA Boden – 2016 – books.google.com
… Neurons were believed by Sherrington to be not only strictly on/ off, but also to have fixed thresholds. So logic gates (computing and, or, and not) were defined as tiny neural nets, which could be interconnected to represent highly complex propositions …