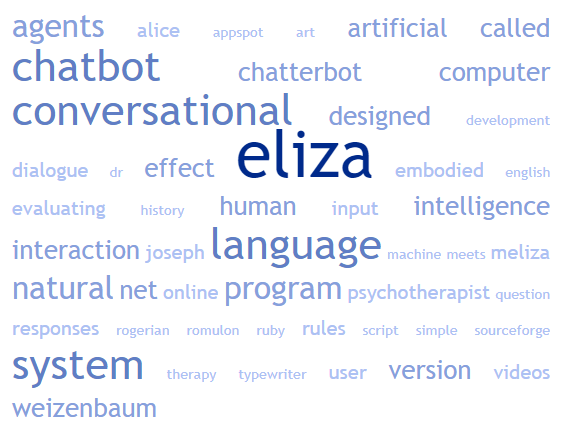 One of the earliest examples of a conversational agent is Eliza, written in 1966 in the LISP language, by Joseph Weizenbaum (1923-2008). Eliza is a rule-based expert system that analyzes input and responses by rules, and is regarded as the first chatbot, so plays an important role in the history of chatbots. In general, Eliza simply rephrased input back to the human, typically in the form of a question. Eliza stored its knowledge-based data by embedding it right into the code. Eliza demonstrates a significant ability to shift the topic of conversation, thus maintaining an entertaining, whimsical facade. To do this, Eliza periodically uses coded rules to repeat fragments of the user’s input phrasing, to give an illusion of understanding what a user has said.

Eliza has been referred to as a person-centered “therapist emulator”, a quasi-psychoanalyst chatterbot which interacts with users via text, or a “therapy program”, as in “Eliza therapy”. The development of the Eliza program, which was capable of engaging humans in a natural conversation and simulated a Carl Rogers empathic psychologist, was one of the first conversational agents with a medical theme. Although simple in design and driven by a script called DOCTOR that performed keyword matching and replacement, it was a very powerful mechanism that tricked some people into thinking they were talking to a real psychoanalyst. The ELIZA effect, in computer science, is the tendency to unconsciously assume computer behaviors are analogous to human behaviors.

Eliza inspired Richard Wallace to begin the ALICE Artificial Intelligence Foundation (Origins of ALICE and AIML). Wallace’s XML-based Artificial Intelligence Markup Language (AIML) has been designed for modeling and specifying dialogs with Eliza-like chatbots such as ALICE. Keyword based linguistic models have found wide utility in question answering research starting with Bobrow (1968), in natural language conversational systems such as ELIZA (Weizenbaum 1966) and PARRY (Colby 1971), and are basic to most Computer Aided Instruction programs. Jordan Mechner @jmechner transcribed the first encounter between Eliza and Apple Siri in “Siri Meets Eliza“.

Eliza has also been influential in both art and popular culture. Jimmy Maher has written online about what Eliza means to the history of digital narrative in Eliza, Part 3. Artists Alexa Wright and Alf Linney point out that Conversation Piece‘s interactive environment, similarly to Feingold’s Head, has its beginnings with Weizenbaum’s Eliza, designed to emulate a Rogerian psychotherapist. Artist Daniel Huhndt @AbsurdApe connected Eliza interactively with an old-fashioned typewriter, and called it “STYPE – Skype Typewriter“. There is a film by @peterhaasBerlin about Eliza’s inventor, Joseph Weizenbaum, called “Rebel at Work“. Google Earth even planted a so-called “Easter Egg” on Mars, a chatbot called “Meliza” (Best Meliza Videos), supposedly a Martian parody of Eliza.