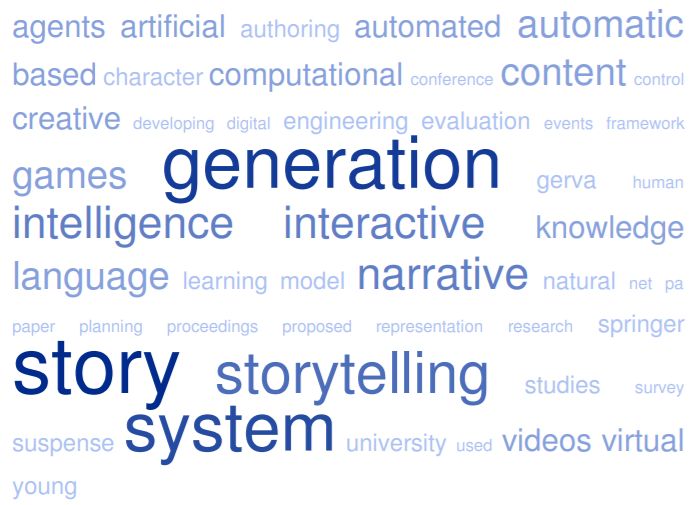 Narratology and creativity
A Abe – Content Generation Through Narrative Communication …, 2018 – igi-global.com
… He is still developing a story-generation system. Currently, it can generate a story outline after setting characters in the story … discussed the Story Generator Project. In their paper, they reviewed many story- generation systems based on artificial intelligence (AI) as follows …

A Demonstration of an Intelligent Storytelling System
YG Cheong, WH Park, HY Yu – 2018 ACM Multimedia Conference on …, 2018 – dl.acm.org
… education, and training domains. In this paper, we demonstrate an intelligent story generation system which plans a story using an AI planner. It then displays the story as a 3D animation using the Unity Game engine. The central idea …

Predicting generated story quality with quantitative measures
C Purdy, X Wang, L He, M Riedl – Fourteenth Artificial Intelligence and …, 2018 – aaai.org
… Most story generation systems are capable of producing stories of only a few sentences to a paragraph … 2013; Zhu and Ontanón 2013). Human-subject studies typically involve the subjects interacting with the story generation system or with the gen- erated stories of the system …

INES: A reconstruction of the Charade storytelling system using the Afanasyev Framework
E Concepción, P Gervás, G Méndez – computationalcreativity.net
… It is a knowledge base generated from the contributions of the involved story generation systems … In this particular case, the adaptation of a purely agent-based simulation-oriented story generation system to a microservice-based pre-existing framework was particu- larly …

Quality signals in generated stories
M Sagarkar, J Wieting, L Tu, K Gimpel – Proceedings of the Seventh Joint …, 2018 – aclweb.org
… They explore the various factors that affect the quality of a story by measuring feature values for different story generation systems, but they do not obtain any … Since this method is similar to an information retrieval-based story generation system, we refer to it as RETRIEVAL …

Exploring connections between primitive decomposition of natural language and hierarchical planning
M Roberts, NRL NAVY – 2018 – cogsys.org
… Recently story generation systems have successfully been integrated with automated planning systems to produce narratives or dialogues that are believable to human audiences because the characters in the narratives perform acts that align with commonsense goals and …

Using Feelings in Images to Support Storytelling Games
GP Dal Molin, P do Rio Grande do Sul, SR Musse – sbgames.org
… The major challenge in this area is the knowledge-intensive nature to be able to generate and tell stories in any domain. Using the proposed Open Story Generation system, the players can learn about a particular domain. They …

Human-Guided Evolutionary Story Narration
K Wang, V Bui, E Petraki, HA Abbass – IEEE Access, 2018 – ieeexplore.ieee.org
… medium, such as text or video and in English or Chinese. Building automatic story generation systems needs to address the following research questions: (1) Of what is a story composed? From a linguistic point of view, as it is a …

Factor Analysis of Utterances in Japanese Fiction-Writing Based on BCCWJ Speaker Information Corpus
H Murai – Advances in Human-Computer Interaction, 2018 – hindawi.com
… developed. Moreover, such mechanisms would be conversely applicable to automatic story generation systems. Among the various elements in story texts, conversational sentences are a challenge for automatic processing …

Storytelling by a Show of Hands: A framework for interactive embodied storytelling in robotic agents
P Wicke, T Veale – researchgate.net
… Scéalextric [50] is one automated story-generation system that uses symbolic representations of characters, actions and causal consequences to invent and render stories with morals. At its core the system is built around action triplets such as the following …

An User-Friendly Recital Teller System
B Dhanalaxmi, IR Kumar, B Vishal – International Journal of Pure and …, 2018 – acadpubl.eu
… Every story generation system defines its specific knowledge representation for supporting the storytelling process. Thus, there is a shared need amongst all the systems: the knowledge must be expressed unambiguously to avoid inconsistencies …

Generating Stories Using Role-playing Games and Simulated Human-like Conversations
A Tapscott, C León, P Gervás – Proceedings of the 3rd Workshop on …, 2018 – aclweb.org
… tion. In this paper we introduce a story generation system that recreates the player interaction sequence that takes place in a tabletop role-playing game (essentially a human storyteller and a player character conversation). We …

Using Social Media Posts as Knowledge Resource for Generating Life Stories
RKMJ Te, JMM Lam, E Ong – Proceedings of the 32nd Pacific Asia …, 2018 – aclweb.org
… stories about their life events anytime and anywhere as they happen. Automated story generation systems can be designed to utilize this vast knowledge resource. In this paper, we describe the approach we used in sourcing …

Wheels Within Wheels: A Causal Treatment of Image Schemas in An Embodied Storytelling System.
P Wicke, T Veale – TriCoLore (C3GI/ISD/SCORE), 2018 – researchgate.net
… 3. Image Schemas in Creative Story-Generation and Story-telling We tie these schemas and their gestures to specific actions in the repertoire of the story- generation system. We build upon the Scéalextric system of [9], since its approach is explicitly action-centred …

Statistical language modelling for automatic story generation
M Vicente, C Barros, E Lloret – Journal of Intelligent & Fuzzy …, 2018 – content.iospress.com
… Although there is still a lot of room for improvement, the preliminary results show that statistical language models can definitely contribute to the development of more adaptive and flexible story generation systems, thus providing mechanisms that can be extended to other kind …

An evaluation of the impact of constraints on the perceived creativity of narrative generating software
L Mckeown, A Jordanous – 2018 – kar.kent.ac.uk
… They highlight that a common difficulty when assessing story generation systems is the lack of an agreed upon comparative structure (Pérez y Pérez and Sharples 2004). To solve this they proposed some rules for evaluation stating that …

Building a Commonsense Knowledge Base for a Collaborative Storytelling Agent
DT Ong, CR De Jesus, LK Gilig, JB Alburo… – Pacific Rim Knowledge …, 2018 – Springer
… relationships. This type of reasoning has been explored in the MakeBelieve [20] story generation system which performs logical reasoning on the cause and effect relations of a chain of events found in ConceptNet. Commonsense …

Reciprocative Framework For Efficacious Learnability And Content Management In Mobile Augmented Reality Ambiance
M Durairaj – 2018 – ir.inflibnet.ac.in
… Norbert braun [137]. While authoring such interactive stories, based on morphological story model, respective functions and roles were assigned and performed successfully by the story generation system. An MAR which augments 3D character and animations with audio was …

Novel Theory and Technology in Modernist Britain
H Fielding – 2018 – books.google.com
… Nick Montfort justifies the title’s key category as an inclusive term for describing electronic literature, even though “there are some related activities that would seem to be left out of IDN [inter- active digital narrative] strictly interpreted,” including “story generation systems that are …

Storifying observed events: Could I dress this up as a story?
P Gervás – Proc. 5th AISB Symp. Comput. Creativity, 2018 – nil.fdi.ucm.es
… range of relevant features. Existing story generation systems often rely on extremely simple solutions for rendering their results as text [8], far removed from the state of the art in natural language generation. This disconnect – be …

Neural Networks for Narrative Continuation
M Roemmele – 2018 – roemmele.github.io
… formalize computationally. Gervás (2009) provides an overview of the characteris- tics of narrative that are most relevant to automated story generation systems, but … 2.3 Interactive Storytelling While many story generation systems are intended to produce stories autonomously …

Interview with the Robot: Question-Guided Collaboration in a Storytelling System.
P Wicke, T Veale – ICCC, 2018 – pdfs.semanticscholar.org
… collaboration. A co- creative approach to storytelling is found in the Mable sys- tem of (Singh, Ackerman, and Pérez y Pérez 2017), which builds on the Mexica story generation system to write lyrics for a ballad that tells a tale …

Rethinking summarization and storytelling for modern social multimedia
S Rudinac, TS Chua, N Diaz-Ferreyra… – … on Multimedia Modeling, 2018 – Springer
… We argue that summarization and story generation systems need to refocus the problem space in order to meet the information needs in the age of user-generated content in different formats and languages. Here we create a framework for flexible multimedia storytelling …

Automatic detection of narrative structure for high-level story representation
M Droog-Hayes, G Wiggins… – The 5th AISB …, 2018 – researchgate.net
… Unlike story generation, summarization has not traditionally been considered a computationally creative task. However, just as a human writer would draw on their knowledge of other stories, so do many story generation systems …

Mímisbrunnur: A Mixed-Initiative Authoring Tool for Interactive Storytelling
IS Stefnisson – 2018 – skemman.is
… 1.1 Background Before I can present my authoring tool, some background concepts need to be ex- plained. These include what I mean by “mixed-initiative system” and how my target story generation system operates. 1.1.1 Mixed-Initiative Systems …

Playable experiences at AIIDE 2018
B Samuel, A Reed, E Short, S Heck, B Robison… – … Artificial Intelligence and …, 2018 – aaai.org
… Otherwise, the participants playing the random version first significantly preferred the intelligent one. In conclusion, we hope other researchers could utilize this system to visualize their experiments and evaluate their story generation systems …

Introducing Mood and Affinity to Generate Brief Template-based Dialogues in Storytelling Systems.
A Oñate, G Méndez, P Gervás – TriCoLore (C3GI/ISD/SCORE), 2018 – researchgate.net
… 4. Conclusion In this paper, the use of templates for dialogue generation in Spanish in the context of story generation systems has been described, along with the use of the characters’ mood and mutual affinity to select the responses in a proposal-like dialogue …

Confronting a paradox: a new perspective of the impact of uncertainty in suspense
P Delatorre, C León, AG Salguero… – Frontiers in …, 2018 – frontiersin.org
Suspense is a key narrative issue in terms of emotional gratifications. Reactions in response to this type of entertainment are positively related to enjoyment, having a significant impact on the audience’s immersion and suspension of disbelief. Related to computational modelling …

From my pen to your ears: automatic production of radio plays from unstructured story text
ET Chourdakis, J REISS – 2018 – qmro.qmul.ac.uk
… and even music. We will examine those elements in a future work. Finally, the method we presented could be combined with an automatic story generation system to generate an auto- matic storyteller. An example would be …

From Models to Stories
AM Madni – Transdisciplinary Systems Engineering, 2018 – Springer
… While technologies exist that can generate stories from a relatively small set of input knowledge, these technologies are still relatively nascent despite nearly 30 years of research in story generation systems. This is where the opportunity exists …

Adventures in Data-driven Game Content Generation
GAB Barros – 2018 – search.proquest.com
Page 1. Page 2. ProQuest Number: All rights reserved INFORMATION TO ALL USERS The quality of this reproduction is dependent upon the quality of the copy submitted. In the unlikely event that the author did not send a complete …

Support this site on Patreon!