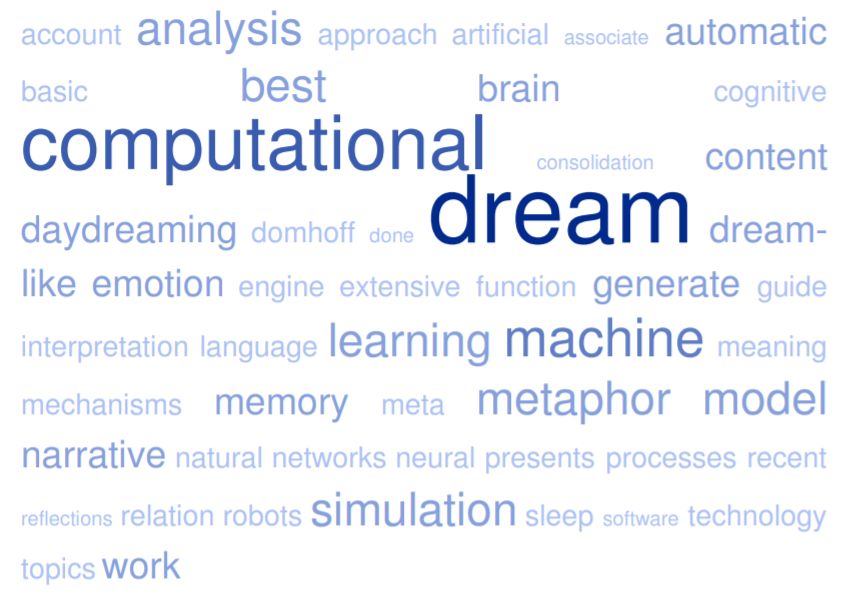 Over the past few decades, a number of basic computational models for dreaming have been proposed in the academic literature. However, there is a larger issue of brain simulation technology in general. So far, brain simulations are relatively rudimentary. However, there is the likelihood of bottom-up and top-down technologies “converging” just beyond the horizon. Very likely metaphor analysis will prove to be the bridge between natural language technology as we know it today and the realistic brain functionality of tomorrow. Here again think about a “clutch” mechanism.

In the field of computational dreaming, trying to programmatically generate dreams, for instance in robots, could be called a “bottom-up” approach; whereas, the more common attempts to automatically analyze, identify and interpret dreams would then represent the “top-down” approach. The term “Computational Dreaming” may have been coined by Eric P. S. Baumer in his 2009 publication, “Dream-like Interfaces and Computational Dreaming“, and who has also done extensive work in “Computational Metaphor Identification“.

Quite a bit of work has been done on dream analytics by oneirologists, G. William “Bill” Domhoff and his associate Kelly Bulkeley. In 2003, Domhoff published a book entitled, “The Scientific Study Of Dreams: Neural Networks, Cognitive Development, And Content Analysis”. For research purposes, Domhoff has even created an online DreamBank “corpus” of dreams. In 2009, Qi Zhang of Sensor System Inc published, “A computational account of dreaming: learning and memory consolidation“. Zhang presents extensive references from neuroscience in support of his assertions, emphasizing learning in relation to his “AI Dreamer” (or computational dreamer) built using LabVIEW, the Laboratory Virtual Instrumentation Engineering Workbench software. In 2010, Sean Voisen completed his masters thesis entitled, Computational Generation of Dream-like Narrative: Reflections on The Uncanny Dream Machine. Most recently (2010), Stan Matwin and his associates have been working on the “Classification of Dreams Using Machine Learning“. JoAnn M. Paul of Virginia Tech also produced a whitepaper on “Computational Dreaming” in 2010. Paul presents a relatively basic material overview of dreaming in relation to computation.

There is a significant and growing body of academic work into simulating daydreaming in machines. I consider this work with “daydreaming machines” to be directly related to computational dreaming, in terms of modelling theoretical mechanisms. The kind and quantity of mechanisms that are postulated by Mueller for human daydreaming are also necessary to account for basic processes of night dream construction.

I’ve read about a number of bots that have implemented a “dreaming” phase for processing information during downtime:

1) The Zabaware Ultra Hal Assistant, by Robert Medeksza, has a “Dream Machine” plugin called “Dream Out Loud” that enables “talking dream mode”.  Apparently, “it keeps track of the topics you talk about then at some idle point will look up those topics and find sentences and or phrases about that topic and will use them to talk to itself” (sort of a sub-conscious).

2) Someone (Alan.Peters @ Vanderbilt.Edu) has actually taken out a patent on “robot dreams” (see below link), but when I contacted them about it got no reply.

3) Vinu Arumugham (link below) has created FemtoThnk (below 2), a cybernetic behavioral model that features higher level brain functions that include a version of dreaming.

4) And another more recent example from the HARUMI project, When Harumi is not solicited by user for more than 10 minutes, she will start to “dream”, meaning she will explore randomly answers available in her database then put back those answers as stimulus if they contain a word non present in entries. This means that she’ll restructure by herself the organisation of her memory in order to be more efficient.