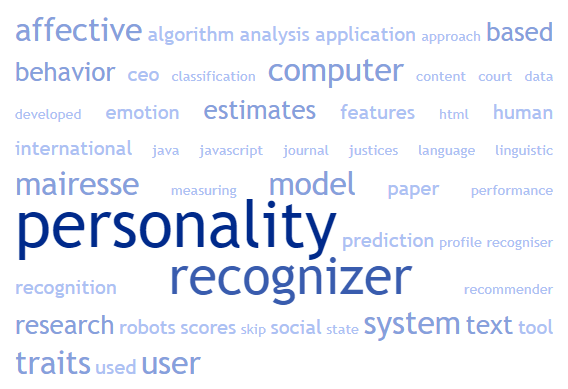 Trait organization the way in which an individual’s personality characteristics are related and comprise a unique, integrated whole.

A portable personality recognizer based on affective state classification using spectral fusion of features
A Basu, A Dasgupta, A Thyagharajan… – IEEE Transactions …, 2018 – ieeexplore.ieee.org
In this paper, we introduce a system named Portable Personality Recognizer (PPR), which classifies the personality of an individual using his/her transitions of affective states. This work attempts to reveal the latent relationship between emotions and personality of a …

Toward real-time personality recognizer for social human-robot interaction
H Bhin, Y Lim, J Choi – cares.blogs.auckland.ac.nz
? Personality is one of the typical behavioral traits of person in various situation. For a long time, the relationship between personality and human behavior has been studied in the field of psychology? To build more natural interaction between human and robot, robot needs to …

Recognition of personality traits using word vector from reflective context
H Bhin, Y Lim, J Choi – 2019 7th International Conference on …, 2019 – ieeexplore.ieee.org
… We are planning to develop a real time personality recognizer that operates with utterance in the human-robot interaction situation … Then, through experiment and performance verification, we made a foundation that can be extended to automatic personality recognizer …

A comparative evaluation of personality estimation algorithms for the twin recommender system
A Roshchina, J Cardiff, P Rosso – … of the 3rd international workshop on …, 2011 – dl.acm.org
… crawled from the TripAdvisor [13]. They are provided by the Personality Recognizer tool utilized by the TWIN system and include linear regression , M5′ model tree, M5′ regression tree and support vector machines. Our goal is to …

Automatic evaluation of neural personality-based chatbots
Y Xing, R Fernández – arXiv preprint arXiv:1810.00472, 2018 – arxiv.org
… In addi- tion, we estimate the personality of each charac- ter as follows: for each character, we randomly select 50 samples of 500 utterances each, and esti- mate the OCEAN scores for each sample using the personality recogniser by Mairesse et al …

Predicting personality traits of Chinese users based on Facebook wall posts
KH Peng, LH Liou, CS Chang… – 2015 24th Wireless and …, 2015 – ieeexplore.ieee.org
… The rest of the paper is organized as follows. In Section 2, we provide the background information about personality recognizer, including the Big Five personality model and related works. In Section 3, we introduce the models used in our experiments …

Mining personality traits from social messages for game recommender systems
HC Yang, ZR Huang – Knowledge-Based Systems, 2019 – Elsevier
JavaScript is disabled on your browser. Please enable JavaScript to use all the features on this page. Skip to main content Skip to article …

Quantitative study of music listening behavior in a social and affective context
YH Yang, JY Liu – IEEE Transactions on Multimedia, 2013 – ieeexplore.ieee.org
… to establish the tripartite relationship between music emotion, user mood, and music listening behavior. Moreover, to access the personal traits of the bloggers, the text-based Personality Recognizer [38] is employed … with the use of the Personality Recognizer [38], [39] …

A model for synthesizing a combined verbal and nonverbal behavior based on personality traits in human-robot interaction
A Aly, A Tapus – 2013 8th ACM/IEEE International Conference …, 2013 – ieeexplore.ieee.org
… A. Personality Recognizer Personality markers in language had received lot of interest from psycholinguistic studies … This first step is used by the robot to automatically identify the user’s personality based on the linguistic cues (the Personality Recognizer tool is used) …

Inferring Trust Using Personality Aspects Extracted from Texts
J Granatyr, HM Gomes, JM Dias… – … on Systems, Man …, 2019 – ieeexplore.ieee.org
… to change/excitement. IV. PERSONALITY AND TEXTS One of the first tools for personality extraction from texts based on the Big Five Model was developed in [27] and was called Personality Recognizer. Since then other works …

Attributes beyond attitudes: Measuring personality traits on the US Supreme Court
M Hall, G Hollibaugh, J Klingler… – Available at SSRN …, 2016 – papers.ssrn.com
… minimizes the possibility of content bias in the measures. We used the Personality Recognizer (Mairesse et al. 2007) to generate SCIPEs for each “Big … methods (Tausczik and Pennebaker 2010). Similarly, the Personality Recognizer was developed …

Classification Algorithms to Predict Students’ Extraversion-Introversion Traits
L Ge, H Tang, Q Zhou, Y Tang… – … on Cyberworlds (CW), 2016 – ieeexplore.ieee.org
… Twitter based on Big Five Model. They clustered the 18,435 Tweets (Twitter messages) into 41 groups, and the groups were labeled by Personality Recognizer 813: which is described above. Then a Naïve Bayes classifier, a …

Devanagari digit recognition by using artificial neural network
R Dhakad, D Soni – 2017 International Conference on Energy …, 2017 – ieeexplore.ieee.org
… Handwriting recognition may be achieved by character, digit and sentence level. a personality recognizer has to be trained with sample characters from the alphabets utilized in the language. There square measure 2 approaches for the of isolated written syllabic script digits …

Guest editorial: apparent personality analysis
S Escalera, X Baró, I Guyon… – IEEE Transactions on …, 2018 – ieeexplore.ieee.org
… regression results. The link between affect and personality is explored in the article entitled “A Portable Personality Recognizer based on Affective State Classification using Spectral Fusion of Features” by A. Basu et al.. The …

Examining Personality Differences in Chit-Chat Sequence to Sequence Conversational Agents
Y Xing – 2017 – eprints.illc.uva.nl
… 16 2.2.4 Personality Recognizer … Based on the correlation between language traits and OCEAN, researchers have proposed personality recognizer: with texts or speeches of a person, his/her personality can be automatically examined with this system …

Finding valuable yelp comments by personality, content, geo, and anomaly analysis
J Koven, H Siadati, CY Lin – 2014 IEEE International …, 2014 – ieeexplore.ieee.org
… For the personality analysis we separated and consolidated the reviews by reviewer into individual files. The MIT Personality Recognizer Tool (PRT) [5] is used to analyze and create a personality profile for each reviewer. The …

An ensemble classification approach for prediction of user’s next location based on Twitter data
S Kumar, MI Nezhurina – Journal of Ambient Intelligence and Humanized …, 2019 – Springer
… Such people are ready to accept new challenges and are very creative. The personality recognizer tool (PRT) (Matthews et al. 2009; PersonalityRecognizerTool 2018) has been used to estimate the personality scores for all the profiles in the data set …

GARS: Real-time system for identification, assessment and control of cyber grooming attacks
D Michalopoulos, I Mavridis, M Jankovic – Computers & security, 2014 – Elsevier
JavaScript is disabled on your browser. Please enable JavaScript to use all the features on this page. Skip to main content Skip to article …

Towards an intelligent system for generating an adapted verbal and nonverbal combined behavior in human–robot interaction
A Aly, A Tapus – Autonomous Robots, 2016 – Springer
… An overview of the system architecture is illustrated in Fig. 1. 3.1 Personality recognizer Personality markers in language had received a lot of interest from psycholinguistic studies. Scherer (1979), Furn- ham (1990), and Dewaele and Furnham (1999) described …

What justices want: Goals and personality on the US Supreme Court
MEK Hall – 2018 – books.google.com
Page 1. Page 2. What Justices Want The most sophisticated theories of judicial behavior depict judges as rational actors who strategically pursue multiple goals when making decisions. However, these accounts tend to disregard …

More than a feeling: Personality and Congressional behavior
A Ramey – APSA 2014 Annual Meeting Paper, 2014 – papers.ssrn.com
… 10JAVA code for the approach is found here: http://people.csail.mit.edu/francois/research/ personality/recognizer.html. 15 Page 17 … cues tied to personality, which are not known to legislators, but which may be captured by the personality recognizer algorithm described above …

Using an affective multimedia learning framework for distance learning to motivate the learner effectively
M Leontidis, C Halatsis… – International Journal of …, 2011 – inderscienceonline.com
… This component (Figure 1) is composed by three subcomponents, the personality recogniser (PR), the mood recogniser (MR) and the emotion recogniser (ER), which are responsible for the recognition of the personality, mood and emotions of the student …

More than a Feeling
GE Hollibaugh, J Klingler, A Ramey – 2014 – publications.ut-capitole.fr
… 12JAVA code for the approach is found here: http://people.csail.mit.edu/francois/research/ personality/recognizer.html … cues tied to personality, which are not known to legislators, but which may be captured by the personality recognizer algorithm described above …

Personality predicting model based on user’s linguistic behavior
Y Nie, G Gao, Y Wang, D Liu… – 2017 9th International …, 2017 – ieeexplore.ieee.org
… The main process is given in the pseudo-code below? IV. EXPERIMENTS AND RESULTS To evaluate the accuracy of the personality analysis model of Chinese personality recognizer, the paper chooses the largest platform Sina to get users’ micro-blog posts as dataset …

Personality-aware followee recommendation algorithms: An empirical analysis
A Tommasel, A Corbellini, D Godoy… – … Applications of Artificial …, 2016 – Elsevier
JavaScript is disabled on your browser. Please enable JavaScript to use all the features on this page. Skip to main content Skip to article …

Personality Trait Recognition on Twitter
B Bermeitinger, T Weißgerber – 2015 – pars.ie
… But there may be a moral limit on how deep a personality recognizer is allowed to work. References [1] Fabio Celli et al. “Workshop on Computational Personality Recognition: Shared Task”. In: WCPR13. 2013. [2] Continuum-Analytics. Anaconda …

What is (s) he worth? exploring mechanisms and boundary conditions of the relationship between CEO extraversion and pay
S Malhotra, W Shen, PC Zhu – British Journal of Management, 2021 – Wiley Online Library
Abstract Integrating human capital theories and the status incongruity hypothesis at the upper echelons, we examine for whom extraversion, the personality trait that has been most strongly and cons…

CEO extraversion and the cost of equity capital
B Adebambo, RM Bowen, S Malhotra… – Available at SSRN …, 2019 – papers.ssrn.com
… The Mairesse et al. (2007) algorithm is available through a Java command-line application, The Personality Recognizer, which reads text files and computes estimates of personality scores for the Big Five personality traits. The algorithm was …

Personality Traits of GitHub Maintainers and Their Effects on Project Success
S Yun – 2020 – uwspace.uwaterloo.ca
… Some of its limitations will be discussed in-depth in Chapter 5.2. Another method called the Personality Recognizer by Mairesse et al. [37] was built on top of LIWC dimensions by incorporating additional features from the MRC Psycholin- guistic database …

It pays to be extraverted: Executive personality and career outcomes
TC Green, R Jame, B Lock – 2016 – Citeseer
… For each report, we retrieve an identifying 6 Trained model files for the Weka toolkit (Witten and Frank, 2005) are available at: http://farm2.user.srcf.net/research/personality/recognizer. 7 Concreteness refers to the ability to see, hear or touch something (eg desk, chair) …

Computational assessment of facial expression production in ASD children
M Leo, P Carcagnì, C Distante, P Spagnolo… – Sensors, 2018 – mdpi.com
In this paper, a computational approach is proposed and put into practice to assess the capability of children having had diagnosed Autism Spectrum Disorders (ASD) to produce facial expressions. The proposed approach is based on computer vision components working on sequence …

Encoding Text Information with Graph Convolutional Networks for Personality Recognition
Z Wang, CH Wu, QB Li, B Yan, KF Zheng – Applied Sciences, 2020 – mdpi.com
Personality recognition is a classic and important problem in social engineering. Due to the small number and particularity of personality recognition databases, only limited research has explored convolutional neural networks for this task. In this paper, we explore the use of graph …

A Cultural heritage framework using a Deep Learning based Chatbot for supporting tourist journey
G Sperlí – Expert Systems with Applications, 2021 – Elsevier
JavaScript is disabled on your browser. Please enable JavaScript to use all the features on this page. Skip to main content Skip to article …

Recognizing CEO personality and its impact on business performance: Mining linguistic cues from social media
S Wang, X Chen – Information & Management, 2020 – Elsevier
JavaScript is disabled on your browser. Please enable JavaScript to use all the features on this page. Skip to main content Skip to article …

Thermal infrared imaging-based affective computing and its application to facilitate human robot interaction: A review
C Filippini, D Perpetuini, D Cardone, AM Chiarelli… – Applied Sciences, 2020 – mdpi.com
Over recent years, robots are increasingly being employed in several aspects of modern society. Among others, social robots have the potential to benefit education, healthcare, and tourism. To achieve this purpose, robots should be able to engage humans, recognize users’ emotions …

#virtualbeings : Empathetic CX and the Power of Customer Connection https://www.facebook.com/groups/virtualbeings/permalink/1294890687642810/

#virtualbeings : I regret to inform you that Digital Human as a Service (DHaaS) is now an acronym https://www.facebook.com/groups/virtualbeings/permalink/1294844224314123/

#virtualbeings : One of the most popular VTubers is now trying to sell you NFTs https://www.facebook.com/groups/virtualbeings/permalink/1294842617647617/

#virtualbeings : What are the features of Portl, the smart fitness mirror that trains, assesses and has a slew of customisable settings? https://www.facebook.com/groups/virtualbeings/permalink/1294278727704006/