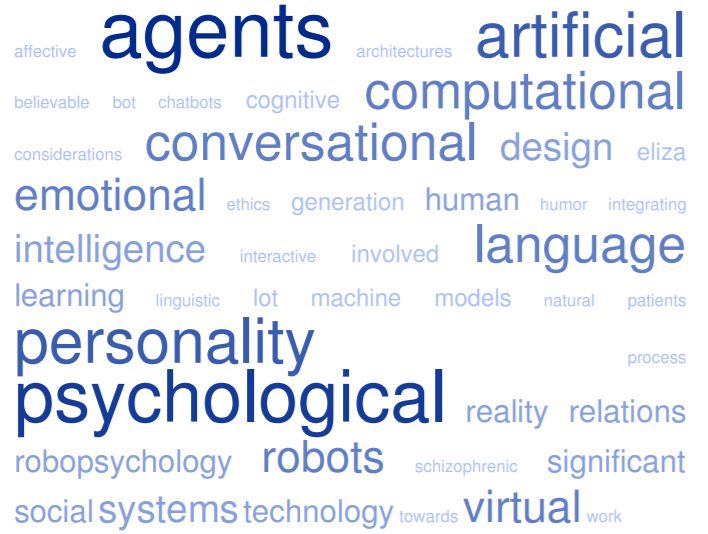 Robopsychology is primarily the study of the personalities of intelligent machines. This is related to a lot of recent work with emotional agents, or “affective computing“; emotions and all kinds of non-verbal communication are the next level of agent technology, beyond natural language programming (NLP). Sentiment analysis is a lot closer to this than most people realize; in fact, data mining is a lot like how conversational agents discover replies. A number of the earliest chatterbots were attempts to mimic “therapists”, most notably Weizenbaum’s ELIZA. There have also been many attempts to mimic pathological psychological conditions, such as schizophrenia, in chatbots. With chatbots in general there is a significant element of “smoke and mirrors” involved, which introduces the human psychological element into the machine in the form of cultural, linguistic and thematic assumptions and expectations, so becoming in a sense a sort of “mind game”. There is something called “Believable Agents”, so believability in agents can be a significant consideration. There has been a lot of work on the psychological aspects of intelligent tutoring systems in educational environments, such as for language learning, medicine (virtual patients), not to mention military. The field of Interactive Storytelling also involves significant psychological considerations. There is also a significant push toward developing interactive artificial companions, in particular for senior care, for which obviously certain psychological sensitivity is required. Artificial moral agents are another area involving psychological as well as philosphical considerations. Personality archiving, or “mind uploading“, is yet another psychological application of conversational agents. In addition to computational creativity, there is also significant work being done in the area of humor in agents, or “computational humor“.